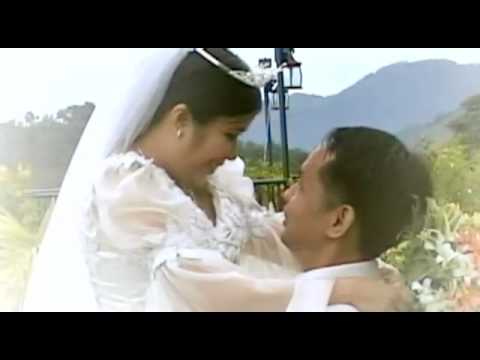 This is strictly just a bride and groom wedding video so you will have to bear with the mushy sequences if you intend to watch the whole thing. Not to worry, we censored out any kissing scene.

This video includes the Chateau de Busay garden photography session, as mentioned in the reception arrival video page, the dove release and first dance .To achieve some sentimental effect, the whole video is given a dream-like appearance: feathered at the edges with a white mist.

Chateau de Busay has several beautiful gardens but we only have enough time for one location. In fact, we only had our post-nuptial photography session on the grassy area around the building, on the hedges of yellow bell flowers. Here, the mountains of Busay in the background look marvelous.

The music background is the enchanting Dada theme: Long Nu Zhi Sheng (vocal performed by Fan Zhuqing) from the Chinese television series "Return of the Condor Heroes," shown in GMA-7 in 2006 as "Love of the Condor Heroes." We rarely watched television, but fell in love with the series for its enchanting cinematography and score when we stumbled upon it. So here we are, applying the soundtrack to our own love story.

In the actual event, we were dancing to Henri Mancini's rendition of Moon River. Long Nu Zhi Sheng's romantic waltz plays in time just as well. The music in this video was played in the actual dove release.