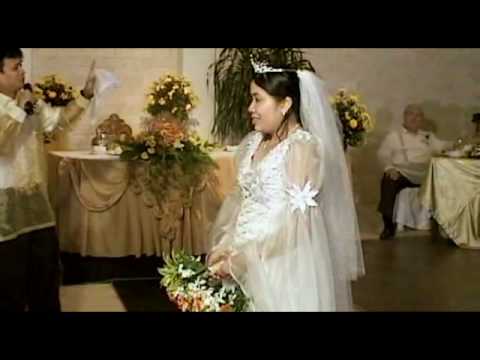 This video proves one thing--that women are braver than boys, or maybe just less cynical about this old wedding game. The ladies were no less frightened to join the bouquet throw and it's fun to see the expression on their faces. Ms. Sheila Auman, the groom's sister, got the bridal bouquet without a squabble and everyone else was glad to be off the stage. You can see the fright on her face, despite her frozen smiles.

Only Mr. James Chapman came up for the garter throw. The garter was handed to him without much ado before anyone else came. Emcee Donald Sabandeja called for a friend nicknamed Mike in particular, one of the few remaining singles in the Fine Arts friends table. Perhaps someone else would have come but most gentlemen around were married. That's probably a statistical fact: there are more single ladies than men in the Philippines.

The background music here is Flora's Secret, performed by Enya. The lyrics describe secret lovers playing in the tall grasses:

We preferred this song for its lively tempo. During the actual reception game, it was Only Time that was playing for the ladies' bouquet throw. Only time will tell if our bouquet catcher will ever get married. Ms. Sheila has had a few suitors over her past. Maybe this time the bouquet will bring her luck. Build Me Up, Buttercup was played for the boys.

Here is the lyrics to Flora's Secret:

Lovers in the long grass look above them,
Only they can see where the clouds are going,
Only to discover dust and sunlight
Ever make the sky so blue.

Afternoon is hazy, river flowing,
All around the sounds moving closer to them,
Telling them the story told by Flora,
Dreams they never knew.

Silver willows, tears from Persia,
Those who come from a far-off island,
Winter chanterelle lies under cover,
Glory-of-the-sun in blue.

Lying in the long grass close beside her
Giving her the name of the one the moon loves,
This will be the day she will remember
When she knew his heart was

And from all around them Flora's secret
Telling them of love and the way it breathes and
Looking up from eyes of Amaranthine
They can see the sky is blue,
Knowing that their love is true,
Dreams they never knew,
And the sky above is blue.