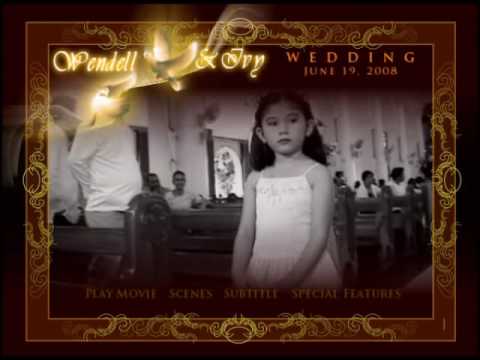 This is the dvd menu which features highlights and recap of the wedding, perpetually looped until a menu item is selected. The menu's color design influenced the video loop to be in black and white and to be black and white calls for the old movie projection look.

The music used is a soaring and dramatic theme appropriate for dynamic shots taken by constantly panning and revolving cameras. Such shots are very few and what we are seeing can only do limited justice to the musical score. Hopefully, the highlight shots available manage to elicit the same dramatic effect.

The Scene Selection menu could still have moving thumbnails later. The good thing about still image thumbnails is each scene is more readily recognizable compared to a moving video that may take a while to show a scene-defining frame. So perhaps it is best to leave it as it is. Music used here is the intro loop of Prayer, the song that will be heard during the processional of the flower girls.

A good amount of time and effort was spent in providing the English subtitles in this dvd as they aid very much in keeping the attention and interest of viewers. These include the lyrics to songs used in the wedding video where there are no dialogues. Subtitles are on by default and can be turned off in the Subtitle menu which features the Redemptorist Church, venue of the wedding ceremony. If you stay in this screen long enough, you will hear the a choral singing of the intro to Miserere, a classical music for Lord, Have Mercy, or the Kyrie.

The special feature of this wedding dvd is only this web site. A copy of this web site is kept at a folder in the dvd and can be accessed automatically when inserted in the dvd drive of a computer. Instruction for manual access is also provided in the Special Feature screen. The music used here is the intro loop of the song No One Like You which is the first track of the dvd. This, in particular, is the instrumental version which is used in the video of the giving of wedding rings and arrhae ceremony.