Entrance March of the Bride and Groom at the Wedding Reception

Already, it was exhausting for us, the Bride and Groom, waiting to be called in by Emcee Donald Sabandeja, the Best Man, for the reception entrance. We have been from the garden pictorial and we are out of breath and hungry. Shortly before, Wendell hurriedly prepared the music assignment for each part of the program and have the discs sent over to the sound operator.

We were standing at the threshold of the staircase leading to the reception area, just below the floor level and were hidden from view of the guests. A waiter kindly offered us a couple of seats and guest friend Mr. Michaelangelo Suarez, came over to look at us while being photographed. Donald was still introducing the guests upstairs.

Then it was time for the entrance... 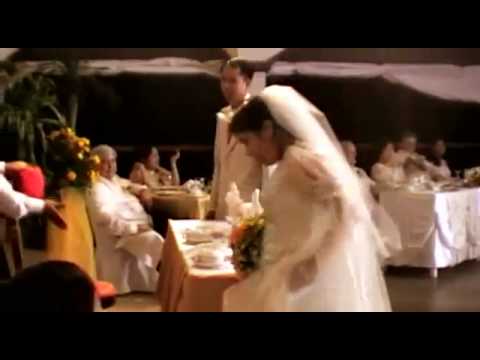 After the entrance, there were people to mention and given thanks. Mentioned in this video is Ms. Dornie Lapiz for making the wedding gown. Sadly, the other ones being thanked were missed by the videographers.

A couple of viewers at YouTube asked for the title of the music played during the entrance at the reception. The first one is The Cup, composed by Raymond Wong, a soundtrack score from the movie Shaolin Soccer. What follows it is Saphira's First Flight from Eragon movie, composed by Patrick Doyle.